For years can Earth had traded with Siluria. One of a handful of alien species that successful contact had been made with during the Discovery Period of 2150-2200, the Silurians had generally been a very friendly race. 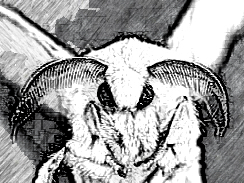 Technologically not that advanced they produced 2 things that Earth imported in large quantities, Baffleberry juice, and silk rugs. The rugs were unique because they had living silkworms in them which meant that the rugs could be grown in the home to fit in the space.

All was fine until the evil Silurian Ambassador to Earth hatched a plan to export rugs with genetically engineered silkworms. At the flick of a genetic switch, the silkworms could be turned into giant monster worms. The Ambassador planned to flood the market with such rugs and then when enough rugs of this type were on Earth, mass trigger generation of the monsters.

His evil plan to invade and terrorise the Earth in this way was uncovered and foiled by the Inspector and Cat, with the help of Joosthava X Minot, in the Silurian Silkworm Affair.