Oh yes, everyone asks what Cat is. Well, in short, he’s a massive pain in the butt to me and a right little know-it-all to boot (occasionally literally:-) ).

In reality Cat (note the capital C) is an artificial intelligence or what I like to call a robot. He has a Rubanon skin which makes him pretty indestructible (though a T. Rex nearly bit him in half once). Now that’s a story – and of course once again I saved his bacon. Not that he’s a pig of course.

Anyway, he is a robot and he is there to serve me and protect me in my duties as an Intergalactic Tax Inspector. Aside from the fact that he has the hardest outer coating known, and inside is full of chips (not the edible kind), he looks to all intents and purposes, due to clever body sculpting, like an ordinary domestic cat. I have to say he has many of the nastier characteristics of domestic cats!! 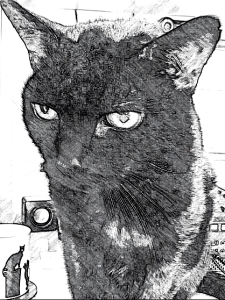