In the 23rd Century parents still have that same old problem of getting their children to eat vegetables. In fact, many parents have the same issue themselves and its all to easy, even in the modern world to just focus the palate on the things that taste best. 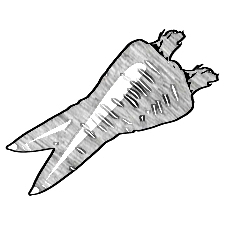 Years of research have shown that no matter how many nutrient substitute pills the conglomerates make, people still want, and prosper best, from eating ‘real’ food. OK, a lot of the produce we consume isn’t as natural as it once was. Anyone who has seen a genetically engineered carrot farm, which  has over 300 floors of so-called soil, would attest to that.

However, the fact is most health conscious folk, and the number of those has of course grown since the mass health-related deaths of the early 22nd Century, still want their veg.

Enter Cortex, the company that first gave us the scope to think our personal devices to do what we wanted. Derived from a long-standing collaboration with Yum-Tum Foods, Cortex has finally, with their MK-XXVI Essence chip made it possible for carrots to taste like steak.

In trials the consumption of carrots soared amongst 3-11 year olds and adults. The World Council look set to give approval for the roll-out of the so-called Carrack across markets. It will retail initially as a whopping 17 credits per portion. As a side effect the DisneyGates Corporation are reviving a popular children’s cartoon character called Bugs Bunny. In promotional aircast Bug’s is seen munching at a Carrak and saying the words, “Aww, What’s Up with this carrot Doc?”

One thought on “The Carrak”

Join 39 other followers
Follow The Inspector and Cat on WordPress.com