ClonaCat was founded around 2110 by Tjoorbaert Morabitz, at the time the World’s most famous genetic engineer. Tjoorbaert was also a massive cat lover and believed that other people like him would pay small fortunes to have their beloved pet cats cloned and re-created after death. Tjoorbaert was certain that he could do far better than earlier experiments at domestic pet cloning that had not quite fulfilled needs. 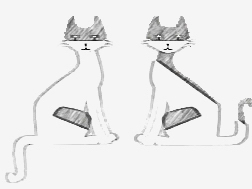 However, just like the early experimenters in this niche market, Tjoorbaert found that the cats he created were never totally the same for the owners as the pets they had just lost. ClonaCat was looking like a failed enterprise until fortuitously, scientists working there on the horse genome, reactivated some ancient genes and created the first unicorn on Earth. This led to a whole new sports activity, unicorn racing, and ClonaCat became a prosperous concern through the selective breeding of unicorns for racing purposes.

The income from their unicorn ‘arm’ enabled Tjoorbaert to continue his research into the domestic cat genome, work that was accelerated by the arrival of a cat called Azz-leX. This cat appeared to Tjoorbaert literally out of the blue one evening (well appeared on his doorstep anyway) and turned out to be the ‘perfect’ cat with an incredible IQ. Not only that, but Azz-leX also provided humanity with the Azz-leX transposon, the cure to the DSR virus that had started to devastate the human population around 2170, near the end of the first interstellar war with the Mud Lizards.

ClonaCat ceased to trade in around 2180, being subsumed by CloneMate, another major cloning company of the time. CloneMate then used the expertise that ClonaCat scientists could bring to make the first generation of rubanon based artificial intelligences (AI’s). Cat, the Inspector’s companion, was the first off the production line and the only output from CloneMate that held a completely expressed copy of Azz-leX’s genome.

2 thoughts on “Clone a Cat”